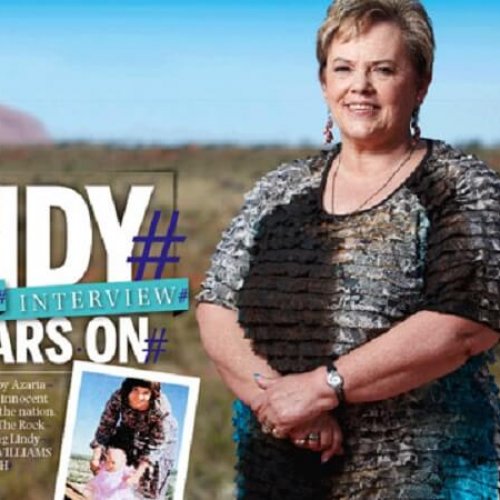 I stopped buying women’s magazines when I was a teenager, because they made me feel like shit about myself and I thought, why read them? I do pick them up in waiting rooms for a bit of a read though – we all do, don’t we? Of course my husband goes straight to the “problem” page, as all men do….

Anyway, so here’s this Woman’s Day and I bought it for Lindy’s article because I was curious about what it would say, but what about everything else in there that makes it Australia’s number one mag?

So here’s my review of Woman’s Day for anyone who’s interested. Maybelline have a new range of liquid mousse foundation – haven’t things progressed? Miranda and Orlando are expecting a baby – lovely. Is she Australian? Must be to get such a prime position in the mag and being married to Orlando Bloom is a big deal right?

Princess Mary is in the magazine, although I’m sure there’s rarely a month goes by when “Our Princess” is not, and there’s a lovely family photo. Much more relaxed and informal than most royal photos and I’ve got to say I think Mary is doing a swell job. Apparently she’s pregnant with twins too – a fertile princes if ever there was one. I am a bit of a fan of Mary. I think she has adapted to this life amazingly well AND the Danes love her. They are truly tickled pink to have an Aussie as their princess. She’s won friends and fans all over the world and it’s nice to see genuine love amongst some royals huh?

Schappelle is obviously in all the mags this week as President Susilo Bambang Yudhoyono considers reducing her sentence. If she’s innocent, I hope she’s free. If she’s guilty, well…. The one thing I’ve wondered about is why anyone would take pot into Indonesia from Australia when the pot in Indonesia is so much cheaper? That’s always been my concern about the validity of the charges. The reality is countries making a stand on drugs can never be underestimated. If they seem liberal to a white girl it might be open season – and there’s been some piss take examples in the past that don’t help Schapelle’s case. All of the Asian countries have this battle so best not to fuck with them.

MasterChef winner Adam Liaw is in love and can’t wait to get married to his beauty Asami. Apparently dancing makes you slim – just ask the Dancing with the Stars girls. I miss dancing. Maybe Steve and I can get as skinny as whippets if we polish up our moves?

Angelina Jolie is certainly making headlines in all the mags, and Woman’s Day is no exception. She has been a naughty little girl huh? And apparently her and Brad have 25 staff to help support their six kids and chaotic lifestyle! Although 10 of them are essentially for personal protection, so that’s really only 15 staff to help run the household. Anyway why is this a bad thing? If I could have 15 staff to run my household I’d be champing at the bit, but I would prefer not to need the extra 10 for protection – that’s no life.

Fergie, bless her, is going to launch her own chat show, thanks to Oprah. Apparently Oprah is finishing her show next year, but she’s launching lots of new talent and Fergie certainly needs the cash, as evidenced by her recent scandal taking money from people keen to meet Andrew. She is a fuck up isn’t she?

Bridie Carter’s had a baby – that’s the pretty one from ‘McCleod’s Daughters.’ Mel Gibson, sorry ‘Mad Mel,’ seems to have lost the plot, throwing himself on his knees in prayer every step of the way. Bless him, he’s done some great movies even if his personal life is a shambles.

There’s a story on some quintuplets (that’s five kids – crikey!!) all getting ready to leave the nest. I have to admit it did cause a few wee tears to form in my eyes! There’s a 99 year old – Dorothy – still playing and winning table tennis. She started competing in her seventies – bless – and she recently returned from a doubles tournament in China, playing with a Japanese lady of 96, but they were beaten by two sprightly German ladies in their 80s. Good on you Dorothy – an inspiration.

Opposite Dorothy is an advertisement for “Depend” underwear – Steve thought it said “Deepend.” Anyways just wondering who this is for? At what age does one start needing to wear disposable panties? Thankfully, when the time comes, they do a male and a female version for a snug fit.

Neutral is the colour in fashion – military inspired khaki, olives and army greens. I’ve done my army days and will never EVER go back, so I will continue to be unfashionable. And what the hell is going on with shoe fashion? They are HIDEOUS!!!

If you keep reading, you can find out what glasses suit your face shape, GAP comes to Aus (can’t believe it’s not here already), and waves are the fashion style for ones hair as evidenced by Annalynne McCord, Kerry Washington, Amanda Seyfried and others – ummm who are these girls?

It’s the end of winter, so time to bronze up girls, Nu-lax is advertised opposite so when you’re bronzing away that pasty white winter skin you can also be shitting away that excess flab gained during the colder months. Naturally there’s lots of anti-aging stuff – yawn – and as always, a few lovely ideas for the table. The choc-chip banana bread looks good.

Mate, Denise Drysdale is still on TV – who knew? And she’s the curry queen. Pretty boring little interview Denise, I mean who would prefer a curry over chocolate really?

Oooooh news is out, Aussies are vitamin D deficient and in Hollywood, the white brigade is lead by Nicole Kidman, Gwyneth Paltrow and Kelly Osbourne. Apparently we all need a good 20 minute whack of sun in the morning or we will get ostepenia, which causes lower bone density and increases the risk of bones breaking – Gwyneth has it. So a little sun is good people!

There’s some top tips to get your kids to love veggies – if mine eat anymore, they’d shit themselves away! A nice story on two sisters who gave the 3rd sister a kidney each – bless them – and then there’s all sorts of stuff, from exciting get-aways to how your pets brain works to setting up a lovely wall display to pet safe planting. I mean, it’s all here!

And then there is an amazing section on spiritual stuff. It used to just be the star signs when I read these mags many years ago, but now it covers everything – dreams, feng shui, psychic readings, the afterlife, and more. You can see how much Australia has changed just by the depth of content in this section.

But wait, look at this! There used to be one crossword and I always remember that because Mum had to do it every week, but now there’s two cross words, a “starburst” (whatever that is!), Sudoku, word find, brain busters and more. Cool! Although I still won’t do them. Was never my cup of tea.

The magazine finishes off with a whole host of celeb photos – some lovely and some unfortunate, but it gives you a nice quick summary of what is going on in the lives of the very famous. It’s always nice to know isn’t it? Oh and the last page – Shane Warne and Liz Hurley are “pictured” at the races, but don’t worry, he only goes for blondes, so two marriages are safe!

And just think, if you got this far, you won’t need to spend $4 buying the magazine. Bargain!