SlutWalks and Rape – Trying to Find Some Clarity Here…

A little while ago I came across Slut Walks following a Mona Gable Blogpost, which led me to the original NYT article it was based on, by Rebecca Traister.  Somehow I missed all of the coverage around SlutWalks and found it a very intriguing idea. It’s also been rattling around in my head ever since and I wanted to write my thoughts down, but I just haven’t had the time or headspace to get my thinking together. So here goes.

For those equally oblivious to these events, SlutWalks came about when a Toronto police officer told a group of college women in May this year that if they wished to escape sexual assault, they should avoid dressing like sluts. Idiot. It actually reminded me of the South Australian judge who, many years ago during a rape trial between a husband and wife, said that “no really can mean yes.” He wasn’t popular. Anyways, as a result of the Toronto cop making this stupid statement, men and women have marched in more than 70 cities around the world, often dressed in “sluttish” attire. It’s not an activity that made it to Singapore suffice to say… Well I don’t think it did?
Both Mona and Rebecca raise this issue quite delicately, with neither convinced that marching the streets in a pair of panties is the way to deal with the situation, but then, what is appropriate? One thing that has always pissed me off is the question in a rape trial – what were you wearing? Like that has absolutely ANYTHING at all to do with rape. I’ve met many rape victims (and have almost been one myself twice) and you know what, some dress sexily, some as modest as can be – and every time I hear this question, I want to scream to the judge and the media often supporting the idea – “if we all dress in ankle length floral kaftans not dissimilar to a tent, will you then finally accept that it is the man’s responsibility?” And if it’s continued to be positioned as women’s fault, you have to ask – do the Arabs have it right by recognising men can’t control themselves, and therefore the women must take responsibility by covering up and dressing in burkas?” Also, if it is women’s responsibility, does that mean the West is as full of sexual repression as is reportedly the case in the Arab world? 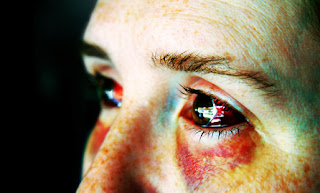 
The point is, we all need to stand together and say we no longer accept any responsibility for the small percentage of men that can’t control themselves and commit acts of violence. The Geneva Convention finally recognised rape as a warm crime, and it’s time for all of our legal systems to get serious about this issue and make it the rapist’s responsibility. Rapists being the guilty party should be the status quo.

And finally, something to be grateful for. To the men and women participating in the world’s SlutWalks, I think you can be truly thankful to live in a society where expressing anger in this way is acceptable. In many countries, when women are raped, rather than being loved and supported by their family and community, they are killed because of the shame it brings on their families – aka “honour killings.” In fact, in many cases, they don’t even need to be raped – just speaking with a man can be enough. Other horrible consequences for many women/girls in the world for just being female, where men seem to be obsessed with the concept of female sexual purity, include female infanticide, dowry deaths, bride burnings, acid attacks, female genital mutilation, sexual slavery and more. In these countries, SlutWalks could not happen. At least most of us don’t have that shit to contend with.
Many of us have the good fortune of being raised in societies that embrace the concept of free speech, and for others, we have that freedom to a certain extent. So in regards to SlutWalkers, go for it, because isn’t it great that you can? And now, in whatever way we choose to fight this fight, let’s all work together to change this mindset, in as many countries as we can, because a change in mindset is well OVERDUE.
Yours, without the bollocks
Andrea
PS: thanks for getting this far. Obviously something I’m passionate about because it is SO important, but I also appreciate that I haven’t gone deeply into many arguments, and missed out on many more, but the blog is already way too long. Forgive my brevity in some cases!