To all my fellow fantasy-heads, I’ve had a bit of a gorge on some awesome fantasy of late, and wanted to share the love – because there are some amazing yarns to read. If you haven’t read any fantasy yet, can I just say give it a go – it will blow your mind! 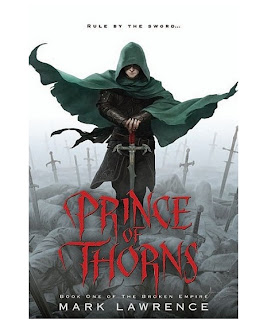 ‘Princeof Thorns’ is Mark’s first published book, and I have to say, this is a very interesting twist on fantasy – in fact, I’ve never read anything like it. The main character, Honorous Jorg Ancrath, is a bloody turd of a kid, but at the same time you can’t help but like him. A young prince, with a complex history of murder and betrayal, his father (the king) is a horrible man, and he has a band of brothers who are some of the most repugnant humans you’ll ever be introduced to. Yet I somehow found this story charming. The best bit – the next book in the series is out, although I haven’t found it at the bookshops yet – I know, I just can’t go e-reader yet. I’ll hold on until the end.

To be honest, I don’t know how you’ll react to ‘Prince of Thorns’ but I can say I found it intriguing.

I’ve been a Sara Douglas fan for many years, but when researching this blog, I’ve only now realised shedied 12 months ago – which is such very sad news. She is one of the great fantasy writers of the last 20 years and the world has definitely lost a very special talent. More importantly, she lead the field in establishing women as serious writers of this genre, as before her it was almost totally dominated by men. Sara Douglas has definitely made an amazing contribution and she’ll be missed.

If you haven’t read any of Sara Douglas’ books yet, they’re all awesome. The Axis Trilogy was absolutely mind blowing in its imagination and scope. But ‘The Devil’s Diadem’ – a single book – was something different again. Based in Sara’s creation of a Medieval England, it focuses on Evelyn Langtofte in a land besieged by a truly hideous plague. Drawing on ancient pagan beliefs throughout the book, which has all the more credibility because of her extensive studies in Medieval Histories, I loved it. It is a really captivating yarn.
‘The Devil’s Diadem’ definitely has a more feminine feel to it than Mark Lawrence’s ‘Prince of Thorns’. His story is definitely more masculine and I know my hubby Steve will enjoy the latter more because of that.
The Outcast Chronicles, Rowena Cory Daniells
Any true fantasy lover will relate to this. I recently picked up “Besieged” in a book shop. I hadn’t read any of Rowena Cory Daniells books before and when I noticed seven published books on the shelves, I figured she must be on to something good. You don’t publish seven books if you’re bad in fantasy-land. Before this, no one had recommended her and I’d just missed her books on previous hunts for something new. Can I just tell you something – BRILLIANT! After consuming “Beseiged” in days and missing sleep, I rushed back to the book shop and got the next two books – “Exile” and “Sanctuary.” I’ve just finished the last one this morning. 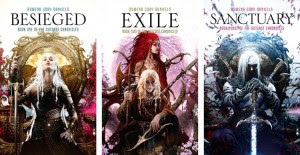 Daniells has created a world and characters I haven’t seen before, and she’s mixed in the greatest qualities, as well as the worst qualities, human beings can have in a fast-paced, action-packed, character-rich story that I could not put down. To be a great fantasy writer I think you really need to grasp the full perspective of human qualities and emotions to create powerful and intriguing characters – ones you love and ones you hate. Daniells definitely understands people and if you haven’t read her books, get going but don’t blame me for the lack of sleep. The best bit, she’s got loads more books published, so if you love her, there’s plenty to consume. That makes me a very happy fantasy reader indeed, because so many times, I’ll look at the shelves, knowing I’ve read everything worthwhile – and that is not a good day for me.

So thanks Rowena for the magic, as well as Sara and Mark, and all of the other great fantasy writers out there. You make my life richer.

As an aside, the best bit about Rowena and Sara is they are both Australian. Aussie women have lead the charge in establishing women as equally brilliant writers in the field, and that makes me a little bit proud. Female fantasy writers just bring a different flavour to the art, and in the last 20 years, the quality of fantasy has skyrocketed. Us fans are so very lucky to have so much talent to consume. I admire every writer for their pure creativity and imagination, because my life would definitely be emptier (and duller) without fantasy in it. Something else I thank my Dad for everyday for introducing me to it when I was so young.

So there you go, five amazing books that have fed my imagination and allowed me to escape from life for a little bit these last few weeks and I wanted to share them because recommendations are everything.

Can anyone recommend anything else worth reading? Steven Erikson any good? Haven’t ventured there yet…