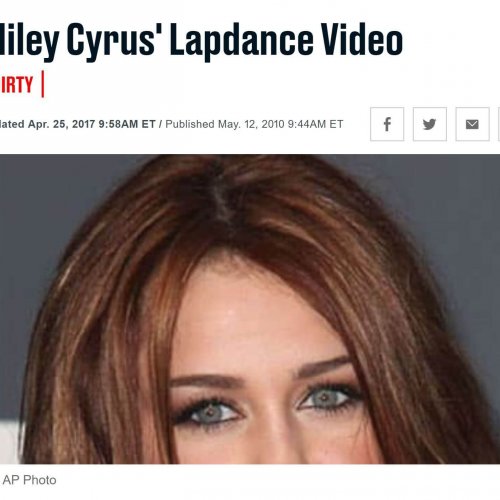 Miley Cyrus has hit the headlines this week because she got caught on video, at the age of 16, giving an older man a lap dance. Don’t worry though, it’s not as bad as it first appears because said man was gay, but still, the media are asking us if we think that is appropriate behavior for a 16 year old starlet?Are they bloody kidding? I mean do we really care that Miley Cyrus gave a bloke a lap dance? Gay or not gay? Are we so thirsty for gossip or are our lives so dull that we’ll participate in these scandals? Do we really think we have the right to judge and assess what is appropriate behaviour for anyone other than ourselves? And does Miley really owe us anything beyond what she does as an entertainer?

It’s Miley’s fault of course, because she has positioned herself (or more correctly, been positioned) in the world as a cleaner than clean goodie two shoes, so any behaviour beyond that is open to discussion and criticism it seems. Not to mention people will be concerned for her future. You just have to think of the other girlie starlets who’ve lost the way – Brittany and Nicole Ritchie come to mind – and of course, we don’t want our girl Miley to follow their path now do we?

Of course, people will say that they are role models for their generation and THAT is why they owe the world better behaviour. Well I’m sorry, super starlets are not role models for my children, because these kids are at an age where they’ve got a lot to learn and are going to make mistakes as they work out what sort of an adult and human they want to be. Thus this pressure to be a role model isn’t really helping them become the sort of people they are supposed to be and if anything, pushes them more firmly into the drug rehab clinics than anything else. Can you even imagine the pressure?

I would much prefer my children to look all around the world, at the rich and the poor, the famous and the infamous, the good and the bad and of course us, the parents, and base their views of who they want to be around all of the input they receive from the world they live in. And the biggest input is their parents, so we should look to ourselves long before we look to Hollywood!

In fact, if there’s anyone famous I’d like my boys to be influenced by it would have to be Steve Irwin – a man of passion, absolute dedication, devotion and a person who was always true to himself, even when the media wolves came to rip him apart. Now there’s a role model and I miss him still.

So Miley, grow up in peace – I, at least, are not judging you. You’ve done a lot already and while it’s not my bag what you;re doing, I still admire you for what you’ve done. You’re going to screw up – it comes with the territory of life and growing up, not just superstardom – and I promise you that I will never judge you and keep my fingers that crossed some of the harsher aspects of life – like class A drugs – don’t get their dirty paws on you. Unfortunately, everything you do is in the spotlight, so you’ll never be able to win, and I can only hope, for your sake, that you will be happy with who you are at the end of it all. That’s the best we can hope for in ourselves I reckon.

Yours, without the judgmental bollocks
Andrea