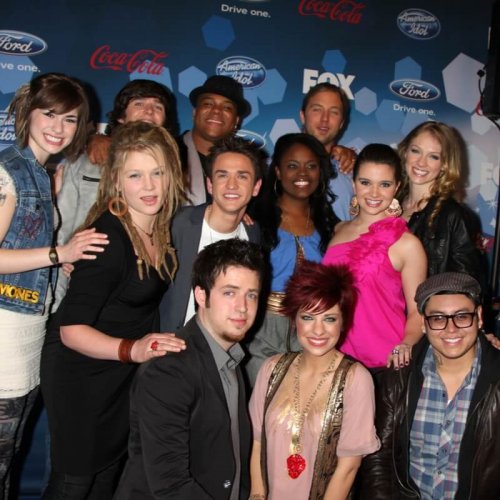 American Idol has upped the drama this year!!!

Steve and I got into American Idol about five seasons ago and we bloody love it. It’s emotional, there’s loads of talent (as well as musical morons of course), but it also focuses on some curious aspects of the human psyche. Yes we definitely love it and get excited about it every week.Last year they had Adam Lambert and I tell you, this man is phenomenal – both of us will be watching his career closely. He’s too old to be Freddie Mercury incarnated, but boy has he got some pipes!! Although he didn’t win… how? We will never know. Some say it’s because he’s gay, but perhaps he was just too glam rock for America? Conservative America obviously remains a powerful force.

This year it doesn’t have the same wow factor, because Adam isn’t in it, BUT the one way they’ve countered this is to really up the drama on the show, and they’ve done it so well! Ryan Seacrest is an amazing host – I don’t think anyone hosts better – and he has us on the edge of our seats. Anyone hosting anything can learn a lot from this man. I mean, did you see Big Mike’s farewell last night? Bloody hell, it had me in tears, but it’s also probably because Big Mike was a very fine human being and he was honored for that. It was a powerful show!

The mentors have also been fantastic this year, but none better than Usher – wow, he’s a man full of heart. I’ll be buying his tunes just because I have seen the sort of man he is. Not to mention Harry Connick Jr., what a funny bastard!

So well done American Idol – you’ve come into your own, and the power of the show is obviously taking off as all of the world’s superstars are clamoring to perform on your stage.

You’ve got a couple of dedicated fans here and please, can our choice win this year? Mamma Sox it is!!