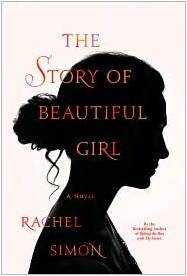 I’ve just finished reading “The Story of Beautiful Girl” by Rachel Simon, and wow, what an amazing book – I’m thrilled it’s achieved the New York Times Bestseller list, because these stories should be told. It’s about two characters locked up in asylums in the 60s, as well as a couple of characters also in their lives (one directly, one indirectly) and the story spans four decades.
In fact, I don’t need to summarise it, because here’s the back cover pre-amble…

“It is 1968. Lynnie, a young white woman with a developmental disability, and Homan, an African American deaf man, are locked away in an institution, the School for the Incurable and Feebleminded, and have been left to languish in the institution, forgotten. Deeply in love, they escape, and find refuge in the farmhouse of Martha, a retired schoolteacher and widow. But the couple is not alone-Lynnie has just given birth to a baby girl. When the authorities catch up to them that same night, Homan escapes into the darkness, and Lynnie is caught. Before she is forced back into the institution, she whispers two words to Martha: “Hide her.” And so begins the 40-year epic journey of Lynnie, Homan, Martha, and baby Julia-lives divided by seemingly insurmountable obstacles, yet drawn together by a secret pact and extraordinary love.”

It really hit a nerve with me, because as a very young girl, I was lucky to be exposed to this community, as my brass and concert bands regularly played at homes for the intellectually and physically disabled, as well as at retirement homes. I remember doing a tour of May Day Hills (a paranormal tourist attraction now?) in Beechworthwhen it was still in operation, getting a firsthand view into how people had to live, and it was frightening and an eye opener for a youngster to see. I’ll never forget it. Now the institutions are closed down, and they manage this situation very differently, but there was a time disabled people were treated little better than animals – which is also discussed in the book. In some ways, it’s a reflection of how humanity has evolved, because we now care for the “imperfect” amongst us.
My exposure to this community got much more intense in my early teens, as my Dad decided to take on a job as an instructor at the Murray Valley Centre in Wodonga. This is also where he met his wife Janet. Both of them did a fantastic job with their students, contributing so much to making their lives better. Dad often tells me how proud he is of me with what I’ve done in my life, but whenever I saw him or Janet working with their students, I would often feel ashamed of what I was doing. Spending most of my life in PR and marketing felt very soulless and insignificant next to the contributions they were making in their student’s lives. I eventually found my peace, as I contribute in other ways right? Regardless, I am in awe of people who work in this field.
A strong memory for me, as a young teenager (and my best mate Dunny should remember this as I used to drag her along) is attending the monthly Murray Valley Centre fundraising discos. I remember being terrified of the HUGE men chasing me around, begging my Dad for permission to marry me – and of course, Dad always said yes. There was this one guy Phil, at well over six foot tall and with bi-focal glasses, who scared the shit out of me. I’d run so fast, and he always ran after me with a big smile on his face. One day Dad said turn around and run after him! So I did and he ran away from me – hooray. Phil also used to get a bit of attention around town, wolf whistling at school girls from the bus Dad drove. One day, Dad pulled the bus over and asked the girls to go and speak to Phil. When they came up to the window, Phil was nowhere to be soon. He was just a big pussy cat, who happened to like girls.
Once I understood I could control the situations, I was able to see that the attention was always from a good place, and any time I visited Dad at the school, I was surrounded by beautiful people who just wanted to hold my hand, ask me to marry them or tell me how pretty I was. It was very sweet, and I always believe I got a great gift having this community in my life. They are the only people I’ve ever met who are completely in-synch with their hearts and emotions. They don’t have the ability to hide their feelings or to lie, and for me that makes them remarkable. We could all learn a lot from them.
So this book was powerful for me, because I had the opportunity to know these people. The writer, Rachel Simon, lived it on a much deeper level, as she grew up with an intellectually disabled sister. However, while she wasn’t exposed to the asylums – because her parents wanted to keep her sister at home – she has the experience to talk about this time in such a sensitive way, but with a depth of understanding that really shows what this time was like. I am just thankful it is no more.
An amazing book and a brave story, which I believe is written for everyone, but especially if you’d like to understand a little more about a group of people in our society who didn’t have a voice for so long. It’s a really beautiful story and I promise you’ll get choked up just a little bit… or maybe a lot. It’s not brutal or sadistic though, so it’s not hard to read – I promise.
While the lives of the disabled are not perfect by any stretch of the immagination, it’s a hell of a lot better than it used to be. I’m just grateful that my life was touched so deeply by the magnificent community at the Murray Valley Centre. We had a lot of laughs, even though I had to run away a lot.
Yours, without the bollocks

2 thoughts on “An Absolutely Beautiful Book”