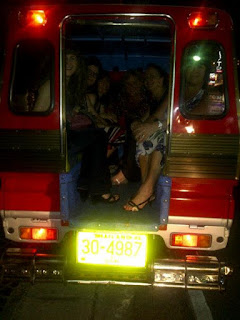 I did something really shocking last week. I went away for five whole days (on my own) to Phuket to celebrate a great friends’ special birthday. The break from normal life was much needed, as it had been 13 months since I’ve had any real time to myself, or any kind of holiday at all. One needs to take care of themselves in the midst of this life malarkey after all. After a lovely girlie long weekend I returned home on Monday, tired but happy, to the loving embrace of my two mini-lads. But that sheer joy at having Mummy home lasted all of five minutes.
However, with that said, Jax has been extra attentive and cuddly since I returned. He obviously missed him Mum and is taking every chance he gets to be with me physically – it’s like he needs the reassurance that I’m home and staying. This includes nightly visits – which have been going on for months now due to the emergence of night terrors – and this means having a constant wriggler in the bed who likes to knead me with his feet. As such, this Mum ain’t been getting much of the sleep required to sustain one’s sanity – but that’s nothing new these past nine months.

No it’s Lex who is punishing me. From the minute he sees me in the morning until I close his door at night he does things he knows will drive me nuts. Any attention is attention after all, and he’s definitely going for my attention in whatever way he can get it. When Steve comes home, Lex punishes him by ignoring him. When I come home, he punishes me by bringing me into a world of naughtiness, belligerence and rebellion, leaving me with my head in my hands wondering what the hell I can do to sort this out.

Lex has had more time outs this week than for the last six months – and he hates time outs. But I have no choice but to leave him in his room to calm down and then I eventually go in, tell him how much I love him and that I’m on his side. I have no bloody idea at all if he understands a word I say, but I can’t think of anything else to do and maybe, just maybe it’ll seep in that his Mum loves him, believes in him, and understands that his feelings are hurt because I went away. I get it buddy.

I definitely understand his need to punish me – because I am his rock in the world – but enough already. And Jax, will you just bloody let me sleep? Please sweetheart, I really don’t enjoy waking up a grumpy bitch.

Suffice to say it feels like a long time ago I was sitting in the back of that Tuk Tuk.

Anyone else get punished by their kids when they dare to go away?