A Couple of God Books 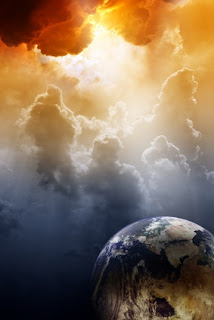 I was brought up Catholic. I don’t mind that heritage because it’s given me a very deep understanding of religion as a whole and I like that. However, very early on, I decided practising and following Catholicism wasn’t for me because too many questions had no answers, other than “have faith.” Faith is fine, but you know, sometimes an answer to a simple question would be nice as well. For me, too much was unexplained, too many ideas didn’t sit well, and essentially, as a female, how could I continue to support a religion that made me inferior just because of my genitalia?

No, it wasn’t for me, but I continued to read extensively on all faiths, because I’m a history buff and it’s just bloody interesting as the whole world has evolved to where it is today with religion at the core. As a result of my early “education”, I spent my 20s working very hard to get rid of Catholic guilt (a HUGE challenge) and started to consider the fact that I didn’t believe in God at all. I never successfully achieved an atheist mind-set (although I tried), but I was close to being a fully fledged agnostic.
The only problem with all of this was I kept experiencing lots of weird stuff – strange happenings and co-incidences – but ultimately, it was the fact I was haunted (starting 10 years ago) by a randy ghost that made me consider there could be something very big and very unexplained going on in the universe. So I started reading more broadly, covering all sorts of topics on souls, angels, the afterlife, quantum physics, and much much more, as well as reading some interesting authors like Deepak Chopra, Dr. Brian Weiss and NealeDonald Walsch, to name a few. But I also read opposite points of view, like Christopher Hitchens, (although I haven’t read Richard Dawkins yet but I’ll get to it) and I even accidentally read the conspiracy theorist David Icke. I can tell you one thing, reading Icke might leave you with a million questions, most of them along the lines of “are you on crack?” – but he does have an ability to make you look at the world in a very different way. Because the truth of the matter is, I don’t know who is right or even if there is any right.

Recently I read two more “God” books and the first one “End of Faith – Religion, Terror and theFuture of Reason” by Sam Harris blew me away. Not only is it a very brave and honest book, but I also think it is one of the most beautifully written books I’ve ever read. This man is a master of the English language. But the book is very powerful, and no religion or society gets off lightly. His focus in the book is religion has the capacity to destroy us and all because men and women are staking “the future of our species on beliefs that should not survive an elementary school education. And then: “religion is as much a living spring of violence today as it was at any time in the past.”

He then lists out some recent faith conflicts:

Of course the list could go on and on and on, but it makes you think. One comment, that I found quite alarming, is the fact that with extremism on the rise in many Muslim countries, most other faiths are on the demise in the rest of the world. What does this mean? People who have a belief worth fighting for are a lot more impassioned than those who do not, and he quite rightly points out that this alone could result in the end of the world…. Very hopeful huh?

Some stand out observations:
“Whenever you hear that people have begun killing non-combatants intentionally and indiscriminately, ask yourself  what dogma stands at their backs. What do these freshly minted killers believe? You will find that it is always – always – preposterous.”
“I have just described a plausible scenario in which much of the world’s population could be annihilated on account of religious ideas that belong on the same shelf with Batman, the philosoper’s stone, and unicorns.”
“It is time we recognised that all reasonable men and women have a common enemy. It is an enemy so near to us, and so deceptive, that we keep its counsel even as it threatens to destroy the very possibility of human happiness. Our enemy is nothing other than faith itself.”
On the subject of honour killings (due to rape): “any culture that raises men and boys to kill unlucky girls, rather than comfort them, is a culture that has managed to retard the growth of love. Such societies, of course, regularly fail to teach their inhabitants many other things – like how to read. Not learning how to read is not another style of literacy, and not learning to see others as ends in themselves is not another style of ethics. It is a failure of ethics.”
There are so many more quotes that I could include, because he really does have a way of saying things that resonated deeply with me but that’s enough for now. However it’s important to point out that this is NOT an anti-faith/spirituality/God book – I saw it as an anti-organised religion book. He fully accepts there’s something much bigger out there in the universe going on, unexplained, not understood – but how this “stuff” has been interpreted throughout history, solidified into set beliefs, beliefs we continue to hold on to thousands of years later, well he has an issue with that. It’s a very frank and honest book, and no one gets out of this alive – especially America and the Muslim faith – but it won’t be for everyone.
As he says in regards to the bigger universe question: “A truly rational approach to this dimension of our lives would allow us to explore the heights of our subjectivity with an open mind, while shedding the provincialism and dogmatism of our religious traditions in favour of free and rigorous enquiry.”
I liked this book A LOT.
The other book quickly is “Wired for God? The Biology of Spiritual Experience” by Charles Foster . Initially I wasn’t so keen, but when I got into it, I found it a really interesting perspective as well. He discusses subjects like the mechanics of the brain (as much as is known) which could explain some of the unexplainable to date (such as NDEs or near death experiences), the consistency of “religious” experience across all faiths all over the world in recorded history, and the prevalence of drugs in the whole religious experience. As far as he can interpret, Jesus was a Shaman, as evidenced by the way he was nailed to the cross – Shamanistic symbolism – and Adam and Eve did magic mushrooms in the Garden of Eden. But he backs it up with ancient images that have been interpreted to support his argument. When you read the drug side of the discussion, it makes sense that societies have so strongly suppressed its use – we’d all be off having ecstatic experiences and coming up with new ideas – well, we obviously can’t have that.
He finishes with consciousness, and you know what, no one can really seem to grasp this tricky topic for me and he doesn’t pretend to. However that’s the whole point right – the big picture seems unattainable to us humans. So if nothing else, read the appendix “Who am I? The Terrible Problem of Consciousness” – I’d love to have a real discussion about that topic, not that we’d know anything for sure at the end, but it’d be interesting.

So there you go, two really interesting books, and if you’re into one “side” or the other, or better yet, like reading all perspectives, I’d add these two to the pile. They’re both beautifully written as well, so a pleasure to read.

My quest for knowledge on the unknowable continues unabated, so if anyone has anything great to recommend – any perspective – very happy to take your recommendation.
Yours, without the bollocks