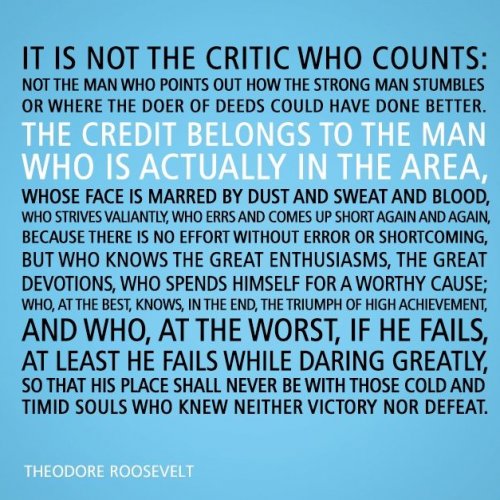 The problem with casual criticism and how it diminishes us all

And it’s about casual criticism. The stuff we put out there, without much thought, especially the impact it can have on others. I was at an event recently, and someone made a disparaging remark about something. It’s not important what they said, but it was an ugly little moment. Anyhoo, I was only an attendee, but I immediately felt hurt for those who had arranged this event.
What if they heard these words?
How would it make them feel?
Would it stop them from doing something again?
Would it crush them enough to diminish their spirit, passion, light?
Potentially, and that is why I care about it so much. We cannot dim another’s light! It’s inexcusable to do that. Casual criticism is lazy and destructive. It’s also always from people who are not in the arena, doing the work. It’s also usually from people who have given up. Who don’t believe we can achieve wonders anymore. It’s SO easy to criticise another, especially if those people are doing good work. It’s easy to stand on the sidelines and rip it apart, pull it to shreds, diminish it’s value. Why do people need to do it? And more importantly, what does it really say about them?

For those in the arena, please fight on regardless, no matter how much it hurts. I can definitely assure you I know the cost, and sometimes it’s unbearable. But we need you. Our children need you. The world needs you. Our future needs you.
Flip it around too. Look at it as an opportunity to help other’s become better versions of themselves by showing them how it’s done. By showing them what belief looks like. By reminding them of the incredible results you can achieve when you believe enough!
Because the only other option is to diminish ourselves. And to be honest, we all lose if we allow that to happen.
Transformative change can only happen if those doing great work, do it regardless of this casual criticism. It would be so much easier if they didn’t have to contend with it though. Across the span of my life, I know it’s rare to have the mettle or the thick skin required to cope. But the bigger risk is, people are silenced. They don’t want to attract that shit. It breaks my heart.
One of the reasons I wrote my next book, Uncommon Courage, is to talk about stuff like this. As the world has gotten angrier and meaner, those of us who are not angry and mean haven’t remained centered. We’ve been impacted by this anger and we have moved towards it, away from our core truth.
Sure we might not be as extreme as those who are angriest, but we aren’t where we were before this all started to boil. Just look at your friends ripping each other apart on social media when they don’t agree with each other?
The easiest way to think about this is Ying and Yang. Light and dark. And we have always needed both, because when we have both, we have balance. Right now, we are not in balance. We have all moved towards the dark a little bit or a lot.
I think we can all understand how it’s happened. It’s hard not to be angry when there’s so much ugliness around us. It’s hard not to respond, to rile up, to bite back. But we have to work harder than those who are most negative. We have to work harder to stay in the light, even when it hurts like hell.
If enough of us do it, we create a tipping point and we can get the balance back. Because do you know who wins if we don’t do this? Those horrible, angry people who are making us more horrible and angry. Ironic isn’t it? But that’s how it works, and because it’s always so intense, we don’t give ourselves the opportunity to see the bigger picture. We need to see this bigger picture, because if we don’t, what we’re fighting for is already lost.
This last five years, which has been exacerbated by a pandemic, has had a HUGE impact in making all of us less loving, giving and beautiful. Our words are harsher, our criticism more cutting, our cynicism more unforgiving.
But we don’t want to be that person, do we? I certainly don’t and I want to encourage everyone to mind your words, especially your criticism, and especially mind it towards those who are doing their hardest to make the world a better place. You might not believe what they’re doing is possible, but don’t stop them believing it’s possible!
The only guarantee of creating a better future is for the craziest ideas to be driven by massive passion and a relentlessness that will ensure success. Let’s get behind it. Let’s support the crazy. And even if we don’t want to get behind it, just don’t criticize it.
When you have a choice, always choose kindness. Thanks for supporting Without the Bollocks for all these years. I’m about to retire this brand, and move it to a new idea I’m building, called Uncommon Courage. It’s a book, podcast, blog, social media and more – where we talk about the big issues of our time. The Facebook Group hasn’t been launched yet, but you can follow me on Twitter here, Instagram here, YouTube here, and Facebook too – although this Facebook page will soon be retired!

Here’s to making the world a better place xxxxx

PrevPreviousOur boys have grown up during COVID19, it’s been mind-blowing
NextIt’s time to say goodbye to a very old friendNext