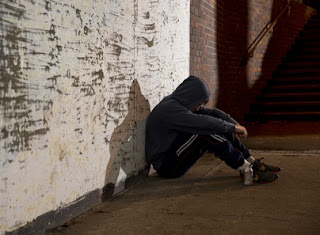 Has anyone watched Secret Millionaire? Mate, talk about messing about with your heart strings. Last year we watched Australia’s “Secret Millionaire,” and this year it’s been the British and now the American one. I’ve got to say, considering these are considered first world countries, some people live in very shite circumstances indeed.

The Australian one was hard, but as a general rule, the basic standard of living – even for the poorest – is much higher than the US and the UK. Don’t get me wrong, some of Australia’s destitute are having a very hard time of it, but one thing to be thankful for is the weather – it makes a hell of a lot of difference when you have to sleep rough. I always remember those poor buggers I’d see sleeping in cardboard boxes in London and Boston during the winter months – ahhhhh – it was so frickin cold!!
In the UK and US there are young families living in single-room-mould-infested-dumps and that is just not how it’s supposed to be in the first world. We all know that people live with the threat of gun violence in the US, but in this show you’ll meet the children who’ve watched their parents gunned down, or their siblings, or friends… Brutal. This show really makes you look at how drugs create horrendous societal problems at every level in both countries, why kids have given up and dropped out of education thus perpetuating the cycle, how the disabled and physically impaired don’t have a chance of meeting basic needs because most people don’t care, and that people are literally starving. One story showed that 65 percent of people in one community were malnourished. This isn’t Darfur, this is the UK and US!
But within every community you’ll find truly amazing people working their arses off to help as many as they can. They’re the true heroes whose only motivation is to make the standard of life for their community better. They’re feeding thousands, giving people respect and dignity, training young people, trying to find jobs for those who need them, pushing the government to provide better housing, taking care of single mums, building playgrounds so children can know some childhood, and they’re taking care of the sick who are unable to get themselves to hospital. People run activities for the elderly, they create safe environments for the young people when everyone else has given up on them and try to get them re-engaged back into society, and they’re doing so much incredible work – mostly without any support from government. But the thing they give the most is love and community spirit – everyone needs that. There really are some remarkable people in this world.
Bring in the millionaires, people who come from very comfortable lives – most of whom have worked hard for it – and within 10 days (only six days for the US millionaires) you watch them profoundly changed by the experience. Most start off with a pretty patronizing attitude towards the poor, but they change their point of view very quickly as many of them get to know “poor” people for the first time in their lives. Also, as part of the deal, they’re “poor” – they have to survive on the equivalent of job seekers allowance while away (six pounds a day in the UK) and live in equally undesirable accommodation – let’s just say most of them start their journey by cleaning the toilet. The one consistent thing is that all of them are absolutely shocked by how their fellow countrymen are surviving in a world that has been comfortable and generous to them. When people talk about the divide between rich and poor, this show definitely demonstrates how deep that divide can be.
Many might be cynical about this show. I mean let’s face it – it’s very positive PR for the millionaires after all. When you do something so public, with yourself positioned as the saving hero, some might be a little sceptical. But I think it’s shedding light on some very challenging situations people within our communities are facing, and if it takes a TV show to bring these things to light to make more of us think about what we can do to help, and maybe even be a little less judgemental of people in these situations, then so be it. And let’s face it, many of the millionaires are donating hundreds of thousands of their own money to these communities, and it’s not just a one-off thing, some are involved for the long term, bringing real value.
If you’re looking for some meaningful TV viewing, I reckon this is a powerful show. It’ll break your heart and give you hope at the same time, but it ain’t always easy viewing. If I ever feel in need of a good cry, I always make sure I’ve got one recorded, but more importantly, it makes me want to do more. And while we don’t need to be millionaires to make a contribution to our society’s welfare, money certainly helps, but so does hope.
Yours, without the bollocks