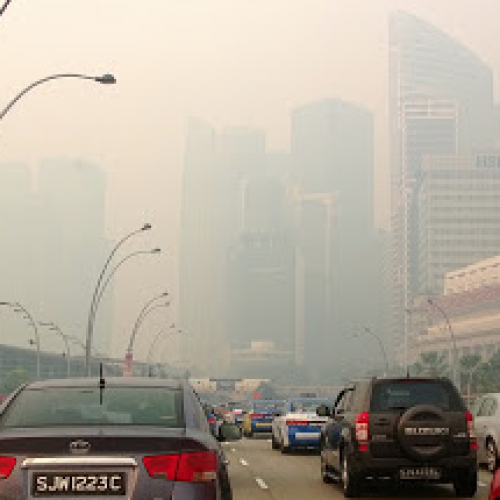 Our Combined Apathy is the World’s Greatest Enemy

In 2013, when the haze went well over 700 PSI in Singapore, the region was in uproar and we moaned a lot. It was awful. We had a right to moan. But I educated myself too. I looked into what caused the haze and made some significant changes in our home, understanding that I was contributing to the haze. I had personal responsibility.
I bloggedabout it too, trying to do my part to raise awareness. I knew those not immediately impacted didn’t have the reasons to care as much as those of us living in SE Asia, but I also knew I had to spread the word, because this was a global issue. We had to act. Two years later, we’re still not acting.
After it was over – done and dusted within two weeks – everyone did a clean aired sigh of relief and went back to their lives. I couldn’t do that. Every chance I got, I asked people what have you changed? What don’t you buy anymore? The best I got were blank looks. People didn’t care. They didn’t know. I got depressed.
Apathy is the worst quality I know. It is what allows bad shit to happen. It is what will destroy the world.
Then recently my friend Avi wrote this blog on LinkedIn titled “Thank You Haze, Please Stay” and I thought, you know what, he’s right. We needed this long, hideous haze. We needed the outrage that comes with it. We needed a massive kick in the arse to wake up and take on board the environmental carnage that is taking place. Now we need to change. Really change.
Another article I came across this week – The guilty secrets of palm oil: Are you unwittingly contributing to the devastation of the rain forests? – was featured in the Independent. While focused on palm oil in the UK, this is an awesome piece of writing and well worth a read. He nails it! Thankyou Martin Hickman. Your voice is bigger than mine.
But just in case it’s too long to read, I’m highlighting the key points/stats from this article:

I loved this paragraph:
“What, then, is “unsustainable” palm oil? Step one: log a forest and remove the most valuable species for furniture. Step two: chainsaw or burn the remaining wood releasing huge quantities of greenhouse gas. Step three: plant a palm-oil plantation. Step four: make oil from the fruit and kernels. Step five: add it to biscuits, chocolate, margarine, soaps, moisturisers and washing powder. At breakfast, when millions of us are munching toast, we’re eating a small slice of the rainforest.”


Continuing with the facts from this article

The article references that “demand is rising at between 6-10 per cent a year. China’s billion-plus population is the biggest consumer, importing 18 per cent of global supply. About 16 per cent arrives in the EU.”
OK the China stat frightens the shit out of me and I want to highlight why. Kishore Mahbubani, (Dean of the Lee Kuan Yew School of Public Policy at the National University of Singaporeand a member of the World Economic Forum) said: the “explosion of Asia’s middle class, which was named this week by the World Economic Forum’s Agenda Council as one of the ten most significant trends for 2014, is stunning.”
Referencing the World Economic Forum Global Agenda 2014 report, it stated that the middle class in Asia is estimated at 500 million people today, but that number is expected to reach 1.75 billion by 2020 – a three-fold increase in just seven years. This prediction is considered one of the biggest seismic shifts in human history– with close to two billion middle class predicted in Asia by the end of this decade. Or think of it in another way – 30 per cent of the world’s middle class population will be based in this region.
That’s why we need to find a sustainable solution NOW. Asia is getting richer and consuming more. Its demand for palm oil will only grow. This terrifies me! And I don’t trust the big corporates to work it out.
I believe that we all need to give a very big fuck about this and we need to give that fuck even if we are not directly being impacted by the haze. The populations directly hit by this annual occurrence is small on the global scale, but it’s not just about us, it’s about all of us.
We need to change what we buy. We need to educate ourselves on what this is all about. We need to stop blaming others and do things ourselves. I need to do more. You need to do more. We all need to do more. The world is on the brink of complete fuckedness, and this has nothing to do with whether or not you believe in global warming. I do, you don’t, I don’t care. Too many animals are on the brink of extinction. This is about the air we breathe.
The challenge is the big corporates are focused on profit and growth, they don’t seem to care about social responsibility. Sure they talk about it, but as this article discusses so well, they don’t really care because they aren’t making changes fast enough. And the year 2020 is too late for many species. Are you happy to have that on your conscious so you can use your favorite soap?
We can impact the bottom line of big corporates by not buying shit products that are destroying the planet. We can demand more from them. The big banks funding this work need to be called to action as well. If they don’t get serious, take your business away from them.
But we also need to help Indonesia. As this article suggests, we’re all up in arms against them, but we fucked our own natural environments centuries ago when we cleared our forests. We expect them to step into line? Well let’s help them. They need to replace the income lost.
We’re breathing clean air again in Singapore and already the conversations are apathetic. People don’t know. They’re not educating themselves. Everyone is relieved it’s over but people aren’t making changes to ensure it doesn’t happen again. We can’t do that. We can’t be apathetic.
Write to the corporations. Make them care! Look at this piece in Mumbrella – Magnum Singapore ‘haze-free days ahead’ tweet raises eyebrows over palm oil sourcing – Shame on you Unilever. Boycott Magnums. Write to them. Get on their social media pages and shame them. Shame them all. Force them to act.
But WE have to act first. We have the power. I beg you. Don’t let this go. Don’t think you aren’t powerful. We all have to be giving some very VERY big fucks right now. Stop buying products with palm oil today please?
Are you with me? What changes have you made? And please, if you care, never stop talking about it. Tell your friends. Help them understand. We need a much bigger movement to #stopthehaze for good.
Yours, without the bollocks
Andrea
BTW I’m on Twitter here, Google+ here, Instagram here, and Facebook too, if you’re interested in the other stuff I share. Feel free to share my blog if you think anyone you know will be interested or entertained. I sure do appreciate it when you do xxxxx