I’m hoping Steve doesn’t mind me blogging an ode to him, but he deserves some recognition for the amazing man that he is. Anyone who knows Steve probably knows that he is a remarkably compassionate man. He’s incredibly thoughtful, funny, loving, affectionate, loyal, devoted, an amazing Dadda and husband, and one of the best communicators I’ve ever known a man could be. He’s awesome and if you get inside Steve’s circle of trust, he’ll never let you down. He’s just not built like that. 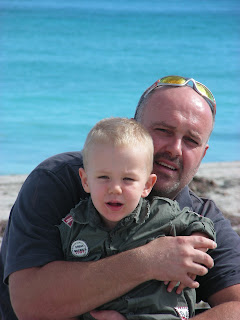 With Lex on the beach in Freemantle

Sometimes I’ve noticed Steve’s willingness to help others can be perceived in a strange way. In these cases, the person he is offering to help or love or give over some hard fought knowledge will pull away from Steve, leaving him feeling very hurt. Did I say he was sensitive too? When this happens, I often say to him that when someone is incapable of doing these things for no benefit to themselves, they cannot cope with anyone else offering it. It’s not that these people are bad; they’ve just never seen any other way and don’t trust the other way when they do see it. The reality is many people are motivated by what’s in it for me (WIFM), but when you’re not motivated by this and just like helping people out because it makes everyone feel good, often the WIFM’s aren’t really comfortable with that. It’s a shame, because Steve always comes from a very generous and loving place – especially when people are important to me, or to both of us.

But he’s learning to deal with this and if you are a recipient of his generosity, in what ever form, know that it is completely genuine and always from the right place. It’s something you can trust in.

In the last couple of years, especially in Australia, Steve was unbelievable. He had to travel pretty much every week, and when he didn’t travel, he had to get up at 4am to drive to the office in Brisbane. He was exhausted. But every night he would come home and put energy into the boys and into me (cut out the filthy thoughts!). I’ve seen many men escape to their ‘man room,’ or just zone out completely from family, but Steve never ever did. I really appreciated this, because as he knew, I was not made of Mother Earth material and found the whole demands of two small children hard to tackle by myself 24 hours a day seven days a week. He always stepped in to give me a break, whenever he was there, always making himself the last priority in his day. 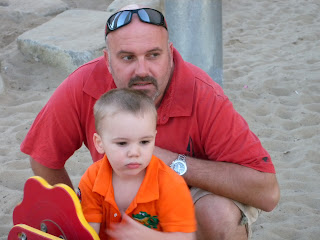 With Jax on Gympie Tce, Noosaville

We agreed to move to Singapore last May. Part of our agreement was that Steve needed to get a job – he needed that security. I said OK, but at some point we need to go no matter what and he said OK. In the end, there were no “jobs” in his field, especially in Singapore, and I said OK then, time to take a chance and fly. Can you do that?

Steve is the cautious one. I’m the one that thinks money grows on trees. Steve needs a plan, a back-up plan and a back-up plan if the back-up plan fails, I say let’s see how it goes, everything will be alright, it always is. And I’m always right too plus my blood pressure is better. I believe that sometimes you’ve got to throw your fate out to the universe, believe and see what happens. You’ve got to work towards your future too, but believing in the first place is what motivates me. It’s always worked and it’s working for us now.

In fact, my belief in the Law of Attraction or the Power of Positive Thinking didn’t come from any books. It came from nearly 10 years of being single (24-33) always with a firm idea in my head of exactly the type of man I wanted in my life, because I did want to share my life with someone. My ideal man had to have the same values and morals as me, he had to be fun, adventurous, funny, with big shoulders and big thighs, and he had to love me for who I was and certainly not be scared of me. Many blokes had been scared and Steve has often been told “good on ya mate. I think Andrea’s great, but wouldn’t have the balls to be with a woman like that.” I always see that as a big compliment – to Steve and to me. When Steve walked into my life seven and a half years ago, he embodied everything I hoped for and so much more. See it’s true and it works single people!

Anyway, so we made the decision to fly to Singapore just before Christmas and we left a week later. It was time to take a leap of faith and see what happened. We arrived with enough money to survive three months before we were on the streets, and in Singapore, it’s hot on the streets. The government probably wouldn’t be too keen on a bunch of Caucasians bunking down on Orchard Road either.

But we’re never going to be on the streets, and while the first six weeks have been a tad anxious, we have great relationships with awesome business people and the work is starting to come in. The first two jobs are launching new business units for two information companies. But that’s another story.

So we’re up and running and getting our teeth sunk in. The boys are in school this week and so far, off to a great start. The teachers are very loving and devoted, so we know it’s going to be OK. After our Australian pre-school fiasco (which was one of the main reasons we left Australia) we will always find it hard being comfortable with schooling for our boys, but they need it and they need to be in a kiddie community. The best bit is they’re at the same school and backing each other every step of the way, so we’re happy with our decision.

While waiting for the School to open, Steve took the boys out every day in the heat and humidity, for adventure time. It was hard yakka, with no end in sight, but he did it and then came home, made the meals, cleaned up (although still no washing), put the boys to bed, and anything else required to ensure I could take my chance to get back into the business world full force. 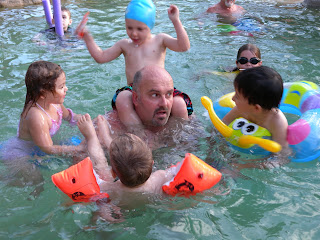 Always entertaining everyone else’s kids plus his own!

I know it’s corny, but I am so proud of Steve for being willing to take a chance, or a leap of faith. It is not in his programming to be like this, and there have been many anxious, heart stopping moments for him in the build up to the changes we made, and since we got here. But he has really embraced the decision, and while having the occasional panics, he too knows it will be the best decision we ever made. That’s pretty incredible moving completely away from your programming don’t you think? I think so.

Steve ain’t sure what he wants to do next, he just knows he wants to do something different. Working in the geosynthetics field for more than 15 years, he’s got a tonne of respect and credibility, but it’s now time to utilise his incredible creativity to do other things. He will be going through an interesting evolution in the next few years, finding his true professional passion and succeeding phenomenally well (because he just will), but in the meantime he’s committed to enabling me to be all I can be and will do anything to make that possible. I know Steve would give up everything to support me achieve my goals and I think that makes me a very lucky girl. I’m a very lucky girl in a lot of ways and Steve is a very beautiful man.

3 thoughts on “My Magnificent Husband”

PrevPreviousSingapore, Where the Living is Easy…
NextShit Dads Can be Good for YouNext