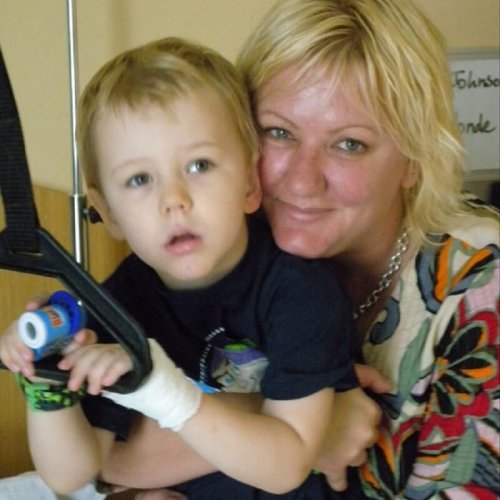 Lex, our first born son, who is now three years and eight months, is a magnificent little man. He is all compassion and heart, he is incredibly clever, and he is the most ambitious child we have ever known – there is not a tree too high to climb, a fence he cannot get over, or a safe place he can’t get to when he sets his mind on something. Believe me, nothing is sacred!Lex has always been an exhausting little fella, because since the day he got on the move (four months) we have never ever been able to take our eyes off him. But that’s Lex and we love him for it – his spirit is amazing and we will do everything we can to make sure it is never squashed.

But there is one major frustration with our little man, and that has been his delayed speech. For three and a half years I’ve had to work so hard to understand his needs because he just hasn’t been interested in speaking, or so it appeared. Lex always seemed to have far more important things to do than speak. Not to mention, I wasn’t worried about it because some kids are just late and what’s the big deal, as long as everything appears normal?

Bring in his two and a half year old brother Jax, who isn’t nearly as adventurous as his big brother (phew… but he’s getting there) and Jax won’t shut up. He has amazing language skills, really bringing big concepts together in his speech and since he started speaking, I’ve got to tell you, it’s been so nice having a child really communicating his wants and needs. He’s also a really funny little bugger, which we LOVE.

The biggest bonus though is it’s really spurred Lex on to bigger things with his speech, just as Lex has spurred Jax on with his climbing skills.

However, since Jax’s development has been pushing Lex forward, for the first time I started to wonder if something was wrong with Lex. He seems to be having trouble with where he places his tongue in his mouth and can’t quite get the pronunciation right. The other thing I noticed is that too much noise and chaos bothers him and he leaves rooms if there is too much going on – especially with lots of kids around.

So I took him to an ear, nose and throat specialist and he has to have his tonsils and adenoids out, and because his ear drums are compressed, he need to have grommets (or tubes) inserted in his ears. This is apparently the cause of all his problems because when you speak to Lex, he hears muffled sounds – put your hands over your mouth and speak – that is what Lex hears!

Naturally, I can’t help feeling pissed off because how many doctors have looked in his ears? How many have looked down his throat and up his nose? How many times have we told them he snores? Oh, if your child snores, that’s not normal and a sign of things needing to be removed – no one ever mentioned that.

But it’s a waste of energy being pissed off right? All that matters is now we know what the problem is we can deal with it. Not to mention, if it was discovered earlier it would have been even tougher facing our little man going in to surgery. The final benefit is probably the most important – as long as it’s addressed before he’s five, he is not expected to have any long term speech problems. So every cloud has a silver lining.

Naturally we hope this is the solution to his problem and we are now bracing ourselves for the anxieties of Lex being operated on. We know he’ll be fine, but crikey, what a thing to have to face for us parents. Just signing a document accepting the risk of death was one hell of a challenge for this Mum. Bloody kids, tear your heart strings out every day.

He’ll be slathered in love though and we’ll need to slather each other in love to cope, but boy is he going to get a spectacular brave boy present!