An Hour of Hell 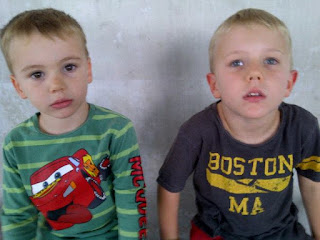 I lost Lex (five and a half) in a big shopping centre yesterday – it’s the first time I’ve “lost” him. Jax has wandered off a couple of times in the past – not very far, but far enough to freak him out because he couldn’t see me. He learnt his lesson and stays close by at all times now. Lex often wanders off, but he’s never far away and is always aware of where I am. I trust him and he knows Mum will always be nearby. But yesterday we came across a mega-toy sale in Singapore, and while any sale sends people into a frenzy, toy sales take that frenzy to a whole new level of ridiculousness. Before we walked into the sales area, I said to the boys – make sure you can see me OK? I don’t know if Lex understood what I said (he’s my speech delayed lad) but he’s smart, has a great sense of direction, and I trust him. They both know to be aware of Mum.
I finally braved the lines to join 100s of other parents wasting money on more plastic crap for our kids. The lines went the full length of both sides of the payment booths, and there were at least 50 people in front of me – thankfully it was moving fast. Jax didn’t leave me, and Lex wandered off to play with something that caught his eye earlier. I had a general idea where he would be, and kept my eyes peeled for him at all times. We’re in Singapore – there is no safer place in the world for children – and I’m a firm believer they need space to be independent too – but I remained alert never-the-less.

Once we made it to the cashier and escaped the paying, pushing, shoving chaos, I grabbed Jax and headed for Lex. No sign. We did two complete laps of the entire complex, and by the second lap, tears were forming and my imagination started going gang busters. There were two aspects to my thoughts. The first is imagining the worst possible scenario – thoughts that do not need to be written down, and as Lex has had more than his share of shitty experiences in his short life, these horrible thoughts were definitely a possibility in my mind. Even though there might be a .00000001% chance of anything like that happening anywhere in the world, but especially in Singapore, that is where my mind firmly went. It’s a brutal kind of self torture.

The other aspect, of course, is a very real concern that Lex would not be able to communicate effectively with the people who found him – especially as he would be emotional as well. I knew he’d have no problem at all talking to strangers, but getting his message across and understood – that was a BIG concern. We understand what he is saying most of the time, but we know him inside out and understand his physical communication as well. That is definitely a scary aspect of having a child with communication challenges, because it could have such a big impact on his ability to be safe.

With my fears elevating by the second, Jax started getting distressed that we couldn’t find his brother and was constantly saying, “Mummy where is Lex? I want Lex?” I dragged Jax around at full speed, trying to keep him calm (which I wasn’t doing a very good job at because I was too distressed), and after a couple of failed attempts talking to staff who couldn’t speak English, found a customer service lady who could understand me. “My son is missing? He’s five. Blonde hair. Blue eyes. Black t-shirt. Green trousers” – the words a Mother never wants to say. She immediately called customer service within the department store and said there is a boy there but he’s Eurasian. I said well that can’t be him. You don’t get more Caucasian than Lex. She encouraged me to go anyway and see if it was him.

Torn – in case he was nearby looking for me – I barrelled my way through the Takashimaya food hall at 5pm on a Sunday night in Singapore – that’s a very busy time to be in a food hall let me assure you. Let’s just say if ANYONE got in my way, they got out of my way very quickly – by choice or by force. Hey I’m a Mother. Jax was dragged along in my panicked wake. We got to the lifts and they took forever to come and Jax said “Mum, where is Lex, he is my brother and I love him?” At that I burst into tears, and when I entered the lift I stood at the back, holding Jax’s hand, with my head down, tears streaming.  I didn’t care what other’s thought – I’m used to being a bit weird here and couldn’t control it anyway.

We walked out of the lift, around the corner, and a huge gaggle of smiling women opened up to reveal a very red-eyed and teary Lex. I sank down and cuddled him, Jax cuddled us both and the three of us just cried and cried. It was bloody wonderful and Lex did not leave my side again. The lady told me when they brought him up he took one of the ladies upstairs to the car park to make sure the car was still there.  When he saw me he said “I couldn’t find you Mummy. I went to the car and it was there. I didn’t want you to leave.” As if I’d ever leave!

Bless that bloody kids cotton socks. He’s the most beautiful and frustrating child on the planet. He is so bright and gentle, but he’s still struggling to catch up with his words and communication – receptive and expressive. The world doesn’t always want to listen to a child like Lex – it’s too bloody hard – but it’s also a massive challenge for parents who aren’t 100 per cent sure if your kid even understands you. At least he’ll know next time that when I say keep Mummy in view at all times, he’ll understand. I hope so. That was brutal, but we found him. Many parents experience that moment for a lifetime…

All I can say is yesterday was a SHIT day. Steve’s in the US at the moment, so I got up to find both boys eating brown sugar – something they know they shouldn’t do. After that, I was trying to Skype with Steve when everything went quiet. I came out to find the bin on fire and I was bloody furious with the boys. A friend told me it all gets easier when they both turn four – well it hasn’t gotten any easier and I never know what I’m going to find – my crazy, chaotic, high-spirited children have turned me into a nervous wreck! Everything calmed down after the fire, we all became friends again, had a really nice time out and about in Singapore, and then the end of the day turned into a nightmare. I really missed Steve at that point, and when I told him about what happened, he had a really bad day. It seems my beloved experienced the same thing when he was a boy of the same age, and it bought all of those memories and fears back – a double whammy. At least now I know why Steve doesn’t let the boys wander off as much as I do.

By the time we came home, all I wanted to do was cuddle my boys and cry. I can’t remember being so emotionally exhausted in a long long time. BLOODY KIDS!! I honestly honestly don’t know why I had them, but my love for them is so powerful it makes my heart ache. I really understand why people choose not to have kids – I really do.