What’s With the Tins of Abalone? 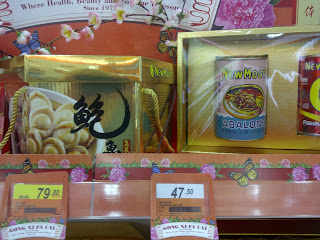 When I first arrived in Singapore 10 years ago, there were various things on the supermarket shelves I couldn’t comprehend, and in many cases, I still don’t. For example, whitening products were a challenge, because the girls are so beautiful, and the colour of their skin – wow. Most Caucasian women would die to have their skin tone. But other confusing items include chicken essence and chicken floss – which I’m still not sure about – and of course, tinned abalone. This is something I am confronted with every Chinese New Year – there’s walls and walls of the stuff – which are edible snails essentially.
Now I usually just think that’s weird, but when reading the Straits Times property section last weekend, I noticed an advert for a $1,200 bed and for a short time only, you could get a tin of abalone for free – value $120! Yes $120 for a tin of food if you bought a bed. Not only could I not put bed and abalone together, the price!
Tin food is something I avoid like the plague. The only tinned food I buy is tin tomatoes, so imagine my bewilderment that food in a tin could cost in excess of $100! But I am nothing if not a curious gal and decided to understand, at long last, what all the fuss was about.
Firstly I asked my great friend, who I’ll call “Ralph.” He asked not to be identified as I don’t think the Without the Bollocks brand is in line with his personal and professional aspirations, although based on his response, perhaps he’s worried he’ll be lynched? It turned out “Ralph” was the worst Singaporean I could ask, because he hates the stuff, but more than that – CNY traditions have never appealed to him at all, his family never ate abalone anyway – because his Dad was allergic to shellfish – AND “Ralph” would much prefer to spend $100 on a good bottle of wine anyway. Thanks mate – very un-Singaporean.
He told me: “I don’t get it either. It’s tasteless and chewy, and while I’m at it, I don’t really get into the CNY celebrations either. As a teenager I used to wear black, because red is obviously the colour of the season, but I never enjoyed all of the red, the noise, firecrackers, dragons and the rest of it. I was a rebel without a cause, and figure I still am today. But with abalone, it’s all about the marketing hype. I get the French eating Foie Gras, I get people being excited about a great bottle of wine, but abalone? I mean, I don’t even get the obsession with shark fin soup.”
Although Ralph does remember one obsession with tinned food, when he admitted one of his childhood “delicacies” was Spam! His Mum used to buy the Maling (no dog meat in the ingredients) brand of spam from China (20-30 years ago I might add), and she’d coat it in sugar and fry it up for him. We both shivered at the thought of what was actually in that tin of pork back then. But then we all have our little revolting food obsessions, as I do occasionally like to steal a chicken nugget when attending kids’ birthday party – a regular activity in my life at the moment. Then again, Jamie Oliver ruined the surprise of what’s inside these little babies, because sometimes you just don’t need to know.
To ensure I ruin chicken nuggests for more people, please see this video:
After speaking with “Ralph,” I still didn’t have my answer to the abalone question, so when in doubt, ask a taxi driver – and this guy was great. He LOVES abalone, usually spends between $40-50 on a tin (which is a lot for a cabbie) and has tasted the $100+ variety as well, which he said was much nicer. Why?
“It’s much more chewy!”
Apparently chewy is good.
His reason for liking abalone – other than the fact it was chewy – is it tastes good and it’s expensive. If you don’t know Asia, expensive is a sign of quality – a hard idea for me to comprehend, because it’s not how I make decisions. However, with 62 per cent of the world’s population here, that’s just too many people for me to argue with. We’re all so wonderfully different.
My taxi Uncle also compared abalone to the French eating goose liver (another revolting idea for me – I just don’t do organs) but there was something else important to note, because it is a delicacy for Chinese New Year after all. Abalone symbolizes something good, and it also symbolizes abundance – so by eating it, you’re ensuring the year ahead is full of abundance. He then used a Chinese word, which I missed, that loosely translated into a tin of abalone is a bundle of abundance. 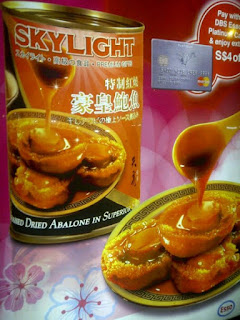 So there you go, buying an expensive tin of abalone is all about ensuring a bundle of abundance for the New Year. I got it now. I still won’t eat it, but I got it.
If any of my other Chinese friends would like to educate me on their experiences with eating abalone, as well as what it means to them, I’d love to know?
And with that, can I be the first to wish my Chinese friends Gong Xi Fa Chai, except for “Ralph,” who’s obviously not going to get in the spirit of the season anyway  xxxx
Yours, without the bollocks
Andrea
PS: if you’re interested in knowing more about what Chinese New Year is all about, I asked a bunch of friends last year, and this is the blog  I wrote.

2 thoughts on “What’s With the Tins of Abalone?”