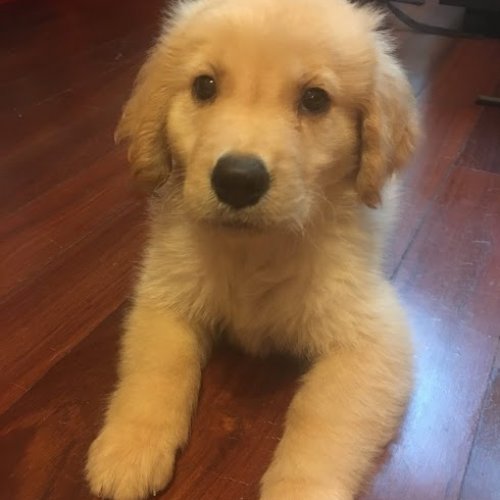 I love cats. I’ve always loved cats. Cats don’t need anything. Oh they let you know when attention or food is required, but otherwise, they just get on with it. They also don’t smell. I like animals that don’t smell.
We’ve got two cats, but we’ve also got a dog. He’s a Golden Retriever called Freddy, he’s one and a half now and more than 35kg – a big fella, but strong, not fat. He takes you out on daily walks, let me tell you. So strong!
He also regularly takes you out at the knees when you’re in his way – oomph!
Anyhoo, Freddy is my fault. I bought him into our lives.
Get this. I took Lex out to look at what was available. Yeah look, right! What was I thinking? As if I could ever walk away from this little face. I mean look at him??
Steve knew I bought a dog before we got home. Let’s just say he was rather unimpressed that I did so. I promised him we’d only look.
And then we entered a world of piss, shit and chaos.
After that it was a world of walking chaos, and eating shit chaos (god I hate how dogs do that – revolting!) and going to the vet for an operation because of some shit you ate that made you really sick chaos……
And then we got a trainer to help us control this beast, and Steph was awesome. Things definitely improved – mainly us, because we finally had an idea of what we were doing. But Freddy is a big, powerful, affectionate fella, who also wants to be the alpha male, and back then, he was virtually uncontrollable.
So we got his nuts chopped off, but it was still chaos.
Our vet even convinced us we had an ADHD dog and we’re like AWESOME!!!! I’ve since been told that’s not possible in dogs, but I’m not convinced…. Of course he is!! Or just an exciti-pants dog.
Thankfully, Steve, who never had a dog growing up, fell head over heels in love with Freddy. The boys too.
Me, not so much.
Oh, I have moments of love for the stupid, bloody thing. Rare, random, moments of affection. I do like him. He’s a funny bugger.
Freddy is now the surfing dog! Look at his paws in the air towards the end of this video.
I also value his role as protector in our home – he’s been awesome to have in Phuket. He’s got a bark on him and we all feel safer knowing our protector is on the case.
I’ll give him something though, he’s managed to secure a spot for another huge personality in our home. I just wish he’d stop greeting people with his gentle kiss – aka a gentle biting of wrists. Some people really don’t like it! Some people really don’t like dogs full stop!!!
Oh my word it’s hard when people don’t like dogs… ‘cos Freddy will love you anyway.
But we’ve got this dog and I try to like him, but mostly, I just don’t like the fact that dogs are so bloody needy – which is why I’ve always been a cat person.
Poor Freddy will often come into the office when I’m working, and I’ll give him a pathetic scratch on the head. He laps it up and when I’m done, he always asks for more, only to get a quiet “fuck off. Thankfully, he’s a smart boy and gets the message, usually heading elsewhere for his affection.
Steve and the boys will roll on the ground with him, hang out, pat him for as long as he demands, play with him, run around…. But me, he gets very little, although I do take him for regular walks on the beach and give him lots of freedom there, so it’s not like I’m a complete bitch, right?
Freddy taking on Xena… a Ragdoll…
Look I do love him. He’s a good boy. He’s a character. But after a year and a half, I just can’t honestly call myself a dog person. I’m still trying. Bloody dogs and bloody kids…
Anyone else feel the same about dogs?
Yours, without the bollocks
Andrea
Thank you for reading my ramblings. My brain and heart are a work in progress, always. I’d love a comment if it stirred any thoughts or feelings and of course, please feel free to share it with anyone you know who might be interested or entertained. I sure do appreciate it when you do. If you want to connect, I’m on Twitter here, Google+ here, Instagram here, YouTube here, and Facebook too. I share loads of stuff, not just my own xxxxx

Want to be a super star online?
Sign up for my e-learning course How to build a rock star personal brand today.

PrevPreviousBelieve in love and don’t settle unless it’s with someone capable of adoring all of you
NextGetting worry out of your life is not easy, but if you can do it, whoa!Next