Jax, Piss Off and Sleep! 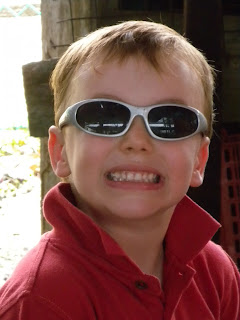 When Jax was born nearly five years ago, he was a bloody legend when it came to sleep. He loved nothing more than cuddling up to his ‘Fuffa Bear’ while sucking on his thumb, and many a morning we had to wake him up to face the day. It was magic having at least one kid who loved his sleep. Then about nine months ago the night terrors kicked in and for that entire time, Steve and I have had to endure a squirming, cuddly little man in our bed, disturbing our sleep – it’s been exhausting. I know, our own fault, but Steve and I did agree that we’d do whatever the boys needed to make them feel safe and loved.
But it’s taken a turn for the worse and not only is he annoying the shit out of us every night, he’s now decided that waking up anytime from 5.30am is acceptable. This is not a good evolution for anyone in our house, especially as he’s started sneaking out so he doesn’t wake us up (considerate of him), only to wake Lex up – grrrrrr!! Early wake-ups are a challenge for me, but the greatest challenge comes from the fact that both boys are not getting enough sleep and thus, they’re miserable little bastards at some point during the day. The heightened tired emotions they’re experiencing, along with our own weary, bleakness, is not pleasant.

But as I know with this parenting malarkey, nothing lasts forever, and if I resist it will persist, so my greatest wish for 2013 is that Jax 1. Sleeps in his own bed and 2. He gets back to the little man who loves his sleep. That’s all I need, really….

With that I would like to wish everyone a VERY VERY Happy New Year. I hope the hangovers tomorrow aren’t too brutal, that 2013 is sensational, that the world moves to a more peaceful and loving place, and that the string of bad luck our family has experienced for the last four years or so is finally over and the good times are rolling on – now that would be a nice change for 2013 and it’s gunna happen.

With love and without the bollocks

BTW If you like what I write about, I’ve launched a Without the Bollocks Facebookpage at long last ‘cos I’m planning to ramp things up a bit in 2013. I’d appreciate any ‘likes’ on offer.